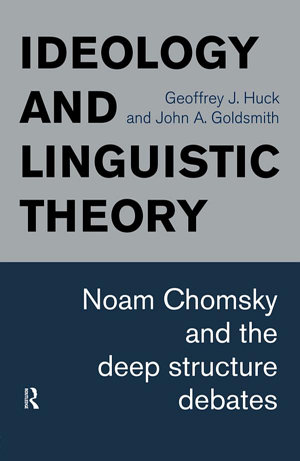 In The Ideological Structure of Linguistic Theory Geoffrey J. Huck and John A. Goldsmith provide a revisionist account of the development of ideas about semantics in modern theories of language, focusing particularly on Chomsky's very public rift with the Generative Semanticists about the concept of Deep Structure. 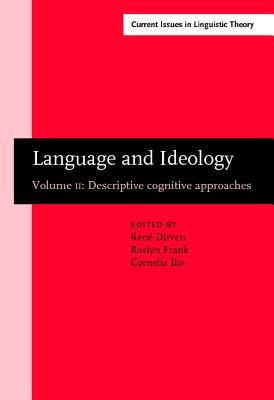 Together with its sister volume on Theoretical Cognitive Approaches, this volume explores the contribution which cognitive linguistics can make to the identification and analysis of overt and hidden ideologies. This volume shows that descriptive tools which cognitive linguistics developed for the analysis of language-in-use are highly efficient for the analysis of ideologies as well. Amongst them are the concept of grounding and the speaker's deictic centre, iconographic reference, frames, cultural cognitive models as a subgroup of Idealized Cognitive Models, conceptual metaphors, root metaphors, frames as groups of metaphors, mental spaces, and conceptual blending.The first section 'Political metaphor and ideology' discusses topics such as Nazi Germany, discrimination of Afro-Americans, South Africa's "rainbow nation," and the impeachment campaign against President Clinton. The second section, on cross-cultural "Otherness" deals with cultural clashes such as those between the Basque symbolic world and the general European value systems; between the Islam and the West, determining its treatment of Iraq in the Gulf War; and between Hong Kong "Otherness" and centuries of Western dominance. The third section deals with 'Metaphors for institutional ideologies' and concentrates on the globalisation of the North and South American markets, on insults in (un)parliamentary debates, and on the Internet being for sale. 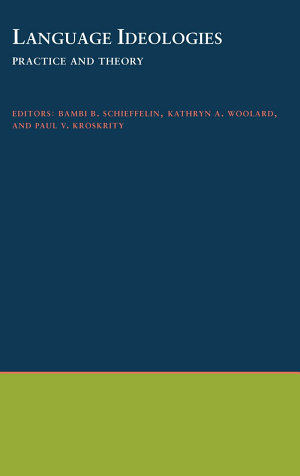 "Language ideologies" are cultural representations, whether explicit or implicit, of the intersection of language and human beings in a social world. Mediating between social structures and forms of talk, such ideologies are not only about language. Rather, they link language to identity, power, aesthetics, morality and epistemology. Through such linkages, language ideologies underpin not only linguistic form and use, but also significant social institutions and fundamental nottions of person and community. The essays in this new volume examine definitions and conceptions of language in a wide range of societies around the world. Contributors focus on how such defining activity organizes language use as well as institutions such as religious ritual, gender relations, the nation-state, schooling, and law. Beginning with an introductory survey of language ideology as a field of inquiry, the volume is organized in three parts. Part I, "Scope and Force of Dominant Conceptions of Language," focuse on the propensity of cultural models of language developed in one social domain to affect linguistic and social behavior across domains. Part II, "Language Ideology in Institutions of Power," continues the examination of the force of specific language beliefs, but narrows the scope to the central role that language ideologies play in the functioning of particular institutions of power such as schooling, the law, or mass media. Part III, "Multiplicity and Contention among Ideologies," emphasizes the existence of variability, contradiction, and struggles among ideologies within any given society. This will be the first collection of work to appear in this rapidly growing field, which bridges linguistic and social theory. It will greatly interest linguistic anthropologists, social and cultural anthropologists, sociolinguists, historians, cultural studies, communications, and folklore scholars. 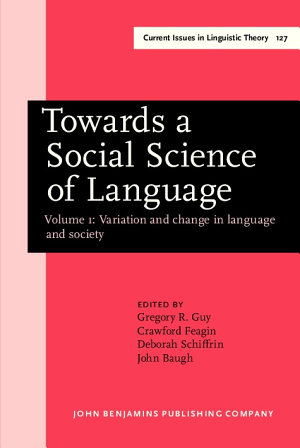 Together with its sister volume on Descriptive Cognitive Approaches, this volume explores the contribution which cognitive linguistics can make to the identification and analysis of overt and hidden ideologies. As a theory of language which sees language as the accumulation of the conventionalised conceptualisations of a given linguistic and/or cultural community or sub-group within it, cognitive linguistics is called upon to make its own inroads in the study of ideology. This volume offers theoretical approaches and first discusses the philosophical foundations of cognitive linguistics. The question whether cognitive linguistics is not an ideology itself is not tabooed. The speaker's deictic centre is the anchoring point, not only for spatial, temporal or interactional deixis, but also for cultural and ideological deixis. Cognitive linguistics is also confronted with a severe Marxist critique, but the potential convergence between the two 'philosophies' is highlighted as well. Further the question is raised to what extent the central nervous system and the grammatical system of a language impose sexually biased, and hence ideological representations on cognition. Finally, linguistics itself is seen as a potential bearer of ideological deviations as was the case with the 'politics of linguistics' in Nazi Germany, and even with the quest for the Indo-European homeland in comparative and historical linguistics throughout the 19th century and well into the 20th century.

Language Ideology and Point of View 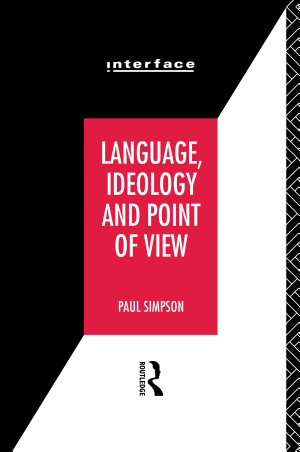 Language Ideology and Point of View

This systematic introduction to the concept of point of view in language explores the ways in which point of view intersects with and is shaped by ideology. It specifically focuses on the way in which speakers and writers linguistically encode their beliefs, interests and biases in a wide range of media. The book draws on an extensive array of linguistic theories and frameworks and each chapter includes a self-contained introduction to a particular topic in linguistics, allowing easy reference. The author uses examples from a variety of literary and non-literary text types such as, narrative fiction, advertisements and newspaper reports.

War and Its Ideologies 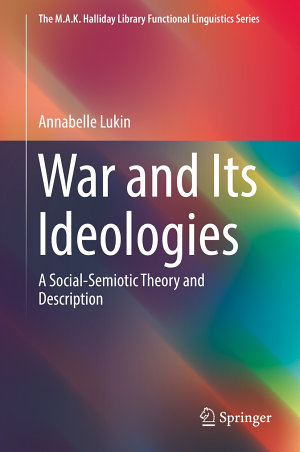 War and Its Ideologies

Ideology is so powerful it makes us believe that war is rational, despite both its brutal means and its devastating ends. The power of ideology comes from its intimate relation to language: ideology recruits all semiotic modalities, but language is its engine-room. Drawing on Halliday’s linguistic theory – in particular, his account of the “semiotic big-bang” - this book explains the latent semiotic machinery of language on which ideology depends. The book illustrates the ideological power of language through a study of perhaps the most significant and consequential of our ideologies: those that enable us to legitimate, celebrate, even venerate war, at the same time that we abhor, denounce and proscribe violence. To do so, it makes use of large multi-register corpora (including the British National Corpus), and the reporting of the 2003 invasion of Iraq by Australian, US, European, and Asian news sources. Combining detailed text analysis with corpus linguistic methods, it provides an empirical analysis showing the astonishing reach of our ideologies of war and their profoundly covert and coercive power.

Ideology in Language Use 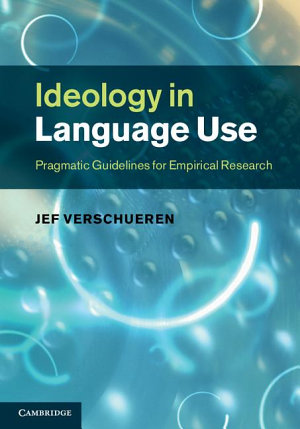 Ideology in Language Use

The relationship between language and ideology has long been central to research in discourse analysis, pragmatics, sociolinguistics and linguistic anthropology, and has also informed other fields such as sociology and literary criticism. This book, by one of the world's leading pragmatists, introduces a new framework for the study of ideology in written language, using the tools, methods and theories of pragmatics and discourse analysis. Illustrations are drawn systematically from a coherent corpus of excerpts from late nineteenth- and early twentieth-century history textbooks dealing with episodes of colonial history and in particular the 1857 'Indian Mutiny'. It includes the complete corpus of excerpts, allowing researchers and students to evaluate all illustrations; at the same time, it provides useful practice and training materials. The book is intended as a teaching tool in language-, discourse- and communication-oriented programs, but also for historians and social and political scientists.

Language Ideology and the Human 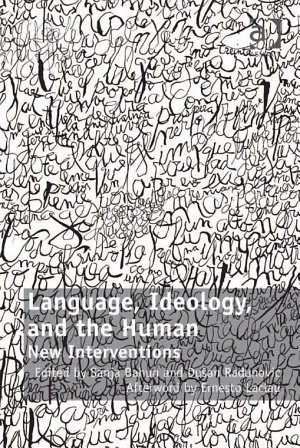 Language Ideology and the Human

Language, Ideology, and the Human: New Interventions redefines the critical picture of language as a system of signs and ideological tropes inextricably linked to human existence. Offering reflections on the status, discursive possibilities, and political, ideological and practical uses of oral or written word in both contemporary society and the work of previous thinkers, this book traverses South African courts, British clinics, language schools in East Timor, prison cells, cinemas, literary criticism textbooks and philosophical treatises in order to forge a new, diversified perspective on language, ideology, and what it means to be human. This truly international and interdisciplinary collection explores the implications that language, always materialising in the form of a historically and ideologically identifiable discourse, as well as the concept of ideology itself, have for the construction, definition and ways of speaking about 'the human'. Thematically arranged and drawing together the latest research from experts around the world, Language, Ideology, and the Human offers a view of language, ideology and the human subject that eschews simplifications and binary definitions. With contributions from across the social sciences and humanities, this book will appeal to scholars from a range of disciplines, including sociology, cultural studies, anthropology, law, linguistics, literary studies, philosophy and political science. 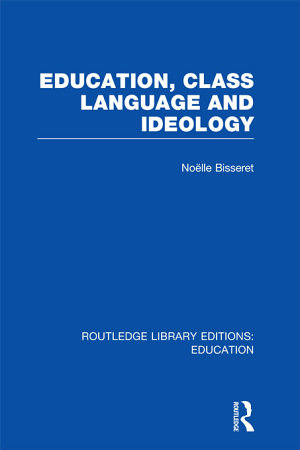 This book presents an analysis of the 'essentialist ideology', which is inherent to class-based societies. The author argues that essentialist ideology is efficient through its unconscious component and is imposed on everyone. It guides school selection and imposes on each class a language specific in its reference to concrete domination relations. It even unbalances the scientific objectivity of researchers in the social sciences, not only among those who abide by the theory of natural aptitudes, but also among its sharpest critics, such as Basil Bernstein, Pierre Bourdieu and J C Passeron, whose work is considered in this book. 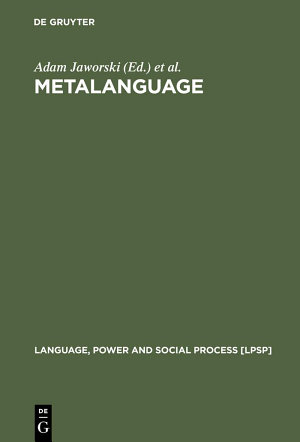 Metalanguage brings together new, original contributions on people's knowledge about language and representations of language, e.g., representations of dialects, styles, utterances, stances and goals in relation to sociolinguistic theory, sociolinguistic accounts of language variation, and accounts of linguistic usage. Drawing on a variety of data sources such as lay and linguists' metalanguage, the media, parliamentary debates, education, and retail shopping, the book comprises four sections and an integrative commentary. The main thematic parts deal with metalanguage in relation to the following issues: the theory of metalanguage, ideology, social evaluation, and stylisation. Other key themes discussed include constructionism, identity formation, in- and out-grouping, deception, discrimination, manipulation, and the increasing semiotisation of the socio-cultural landscape. Apart from the strictly linguistic concerns, some contributions focus on discourse in a broader sense examining meta-commentary construed in modalities other than language. The book follows from and complements a great tradition of the study of metalanguage, reflexivity, and metapragmatics, and offers a new, integrating perspective from various fields of sociolinguistics: perceptual dialectology, variationism, pragmatics, critical discourse analysis, and social semiotics. The broad range of theoretical issues and accessible style of writing will appeal to advanced students and researchers in sociolinguistics and in other disciplines across the social sciences and humanities including linguists, communication researchers, anthropologists, sociologists, social psychologists, critical and social theorists. The book includes chapters by Deborah Cameron, Nikolas Coupland, Dariusz Galasinski, Peter Garrett, Adam Jaworski, Tore Kristiansen, Ulrike Hanna Meinhof, Dennis Preston, Theo van Leeuwen, Kay Richardson, Itesh Sachdev, Angie Williams, and John Wilson.